i’m still sick. blogging in some pj pants and a hoodie.
but, let’s move on… 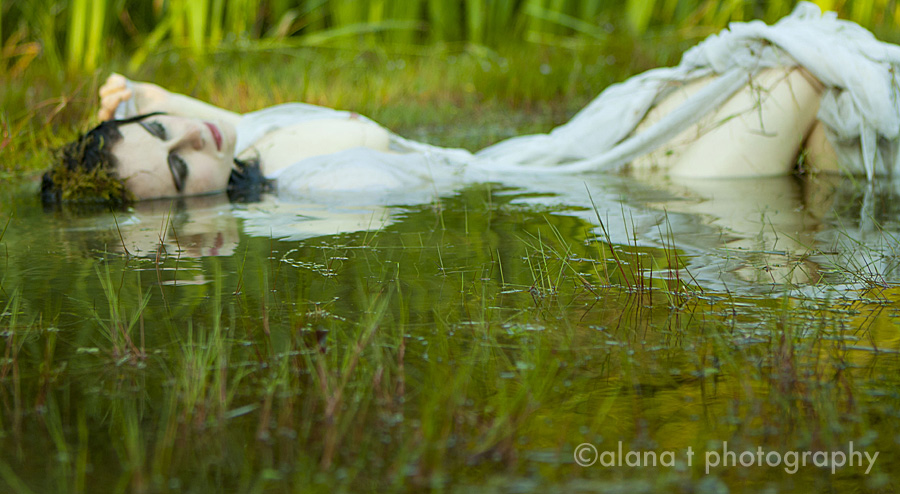 as you saw in part 1 of this blog (or maybe you didn’t see), all of those photos happened while i was in school.  well, i then became surprisingly and happily pregnant with my son and took off a little over a year from shooting to just focus on mommy-ing.  this photo shoot here brought me back.  meet swamp lady.  a shoot that was a brainchild of my super talented friend, rhi, of rhivolver (you can find her brilliance here: http://www.facebook.com/pages/RhiVolver/238295929552781). anyway, rhi came up with the smart idea of getting a few of us ladies back into shooting by creating a very small women-of-tacoma photography group.  i must thank her for this, because it really brought me back and brought me back strong!  i’m absolutely LOVING shooting again. (thank you, rhi!)
anyhow, we got down and swampy dirty with our lovely model here.  there were creatures greeting our legs beneath the surface that we wouldn’t be able to identify if we tried.  we all felt like we were going to be stuck in the swampy muck at different points while shooting, but we persisted, and i’m glad we did.  it was hilarious, super fun, and somehow empowering.
the technical stuffs: canon rebel xsi, 24-70mm, ƒ2.8, 1/400, ISO 100.
p.s. are any of you familiar with “The Lady of Shalott” painting?  i remember it on the wall of my dad’s house when i was a child, and when i was editing this photo, it reminded me of that.  just a personal side note.

ahhhhhh, maternity photos.  i’ve always dreaded taking maternity photos because i’m not into taking cheesy, super-posed photos.  i do realize that that is what some people want…i just prefer the more photojournalistic/editorial style.
anyway, this is mara and greg.  they were having a baby.  (i say “were”, because they just had their son, balen, a few days ago!  i cannot wait to meet him!!!)  they were awesome and willing to go with my vision of maternity photos and make it about them and how happy they were to soon be welcoming their son.  of course the belly would be in the photos!  it just doesn’t have to be allllll about the belly, you know?  so, we went to places that they like to go together and hang out, and we took some photos of them…being them.  my favorite.
i love this shot because she really looks like she just came to the realization, “WHAT?! WE’RE HAVING A BABY??” and greg is just like, “really..?” mara is always full of expressions and i love this woman for it.  she is suuuuuper easy to photograph.
the technical stuffs: canon 7D, 50mm, ƒ2.5, 1/320, ISO 6400 (yeah, super high ISO, we got a late start and were chaaaaaasing the sun. thank you, 7D, for still making this possible.) 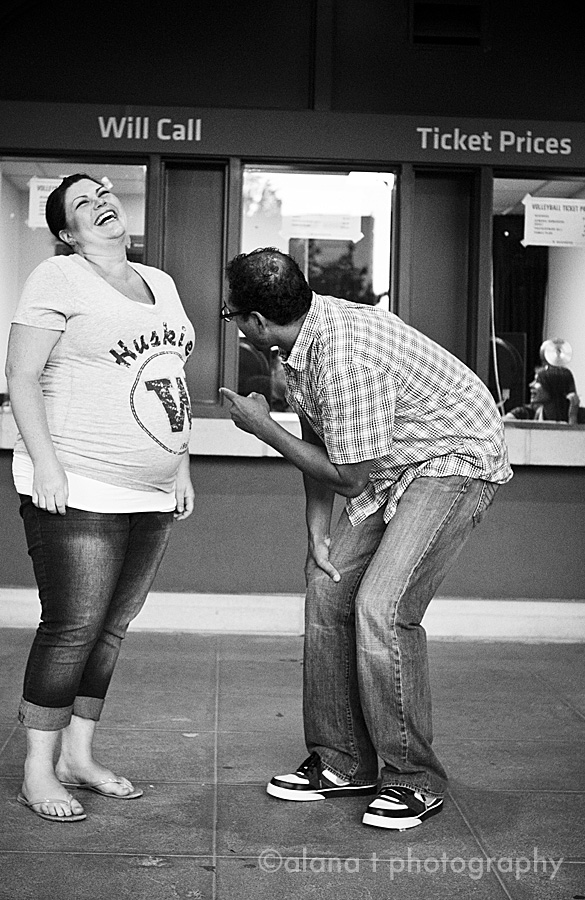 same shoot, obviously.  i felt it was super important to shoot at Husky Stadium, where these guys met, fell in love, and continue to enjoy rooting for their team.  i love the story this photo tells, as greg is telling little balen where he met his mama.  this really captures who these guys are…awesome, fun-loving, hilarious people.
the technical stuffs: canon 7D, 24-70mm ƒ2.8, 1/500, ƒ2.8, ISO 2500.

haha. animals.  i had the pleasure of shooting the copeland family, complete with their adorable dog, darby.  this shot just was priceless.  i love that you can see the spray, complete with their expressions in the background.  mallery’s shock, tony’s amusement, and little owen’s awesome smirk.  yeah, i just love all of that.
the technical stuffs: canon 7D, 50mm ƒ1.4, 1/4000, ƒ1.4, ISO 400.

this photo will go down in history as a top favorite of mine.  maybe you recognize my brother now, from my last post.  this is his family…complete with my niece and nephew, my new sister-in-law, and my new niece, maya.  we did some standard family photos (by standard, i mean photojournalistic style, at a “park” sort of place…), and then we executed my ridiculous and hilarious brother’s vision of doing some pretty white-trashed-out photos.  i don’t think i need to say much more than that.
but, i love all of this…and i think that maya’s expression really takes it over the top.  the radio flyer doesn’t hurt, either.
the technical stuffs: canon 7D, 24-70mm ƒ2.8, 1/60, ƒ2.8, ISO 100.

last (but not least) three…

man, i loved this shoot.  the idea for this had been bobbing about in my head for the previous two years, ever since i saw a “trash the dress” shoot for the first time.  (if you are not familiar with the “trash the dress” concept, it is basically when you finally realize that your wedding dress is just going to hang in your closet for the rest of your marriage doing nothing, so, why not do something awesome with it and take it out in style??  therefore, women “trash” their dress…usually in a beach/lake/creek setting, all pretty and dainty-like.) i thought, if you’re going to actually “trash” the dress, why don’t we REALLY trash it?  make it pretty, yet edgy…why not on a pig farm?
for two years i thought about this, with no idea where to shoot it, until i remembered that my cousin and her generous husband own pigs near mt. adams.  after they so kindly agreed to help me out, everything came into play.  this model has never modeled before (i know, unbelievable) – she just lives in the area and was awesome enough to help us out.  she didn’t have to trash her own dress…i was gifted this dress to use (thank you, again, nanette!), which fit jaecee, our model, perfectly.  i did her makeup, we ratted out her hair, and we began shooting – in some swampy reeds, on a 4-wheeler, in some rain, running down a dusty road, laying in the middle of another road, chillin with some pigs, and sittin on top of a truck. (these can all be found on my facebook page as well.)

as far as these photos, specifically…

the top one is one of the first photos of the shoot.  i didn’t want a “model” look to the shoot so much…i wanted it to look like a girl who sorta got left behind on the side of the road for these shots.  thus, the super casual pose and the gun propped behind her – not her posing and holding the gun all model-style.  the setting was also super important to me.  i LOVE that blue wall as a backdrop. when we originally arrived, there was a camper trailer stationed in front of the wall. i almost didn’t say anything about it, but then decided that i would regret not having that backdrop, so, i asked. shane was kindly willing, moved it, and..voila! ask and you shall receive.
the technical stuffs: canon 7D, 24-70mm ƒ2.8, 1/640, ƒ2.8, ISO 100.

the second photo i love because of all of the texture, the positioning of her arms, everything…
i feel like this one has more of an editorial feel to it.  if i’m going to do a shoot with a model, as opposed to a family shoot, or portrait of someone, i’d like it to tell a story.  i feel like this shoot might have accomplished that.
the technical stuffs: canon 7D, 24-70mm ƒ2.8, 1/125, ƒ2.8, ISO 100.

bottom line: i love the photos i take to tell a story.  i love emotion.  this is why i love these in particular.

thank you for reading. ❤
’til next time… (which i think will be sooner than later, this week.  there are some questions i have and some things i need to say…)